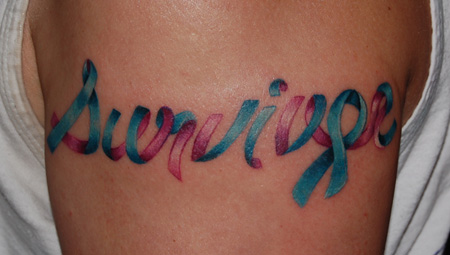 So, it’s October. And the breast cancer awareness bus has arrived. Again, if you’ve read previous blogs, I am very clear that all the focus on breast cancer awareness has saved lives. It is working. Those of us with ovarian cancer just feel like it’s time to talk about ovaries and not just boobies. That’s just the way many of us feel as September rolls into October. So, we thought it would be relevant to hear from a survivor of BOTH breast and ovarian cancers. Meet my friend Georgette…

Georgette, I understand you are both a breast and ovarian cancer survivor. Tell us a little about your story, diagnoses, timeline, current status, etc.

On Christmas morning of 2009, I found a lump in my breast and was officially diagnosed with Stage 2 breast cancer about a month later. They initially thought it was pretty small so we moved forward with a lumpectomy. As can happen, when they got in, they discovered it was bigger than they thought and my tumor marker blood test was very high. I went from thinking this was an easy lumpectomy with no chemotherapy to 8 rounds of Dose-Dense (every 2 weeks) treatment. I went back in for a double mastectomy and TRAM flap reconstruction in August 2010. That might have been a little soon after chemo, but I was determined to have this done in 2010. I saw my oncologist every 3 months for 3 years and took some of the drugs prescribed for reducing risk (Tamoxifen, Femara). After 3 years, I started seeing my doc every 6 months.

Like most women, I had had friends with breast cancer, and an aunt had it when I was younger. I also lost my dad to cancer when I was young. But I was following all the guidelines for detection. Thankfully self-detection led to an early stage diagnosis.

I had some job stress in 2012, and more in late 2013 and early 2014 when I really started noticing some weight gain in my upper stomach, where I had not gained weight before. I thought it was stress related.

In June of 2014, I had a regular appointment with my obgyn and we talked about my weight gain. I did talk about some stress. But nothing else was recommended or discussed.

Finally I was at a play in late October and went to the bathroom. I almost passed out in line – bladder too full, or some kind of pressure and pain in that area. I called the obgyn and she did bloodwork and ordered a scan. In November, I was finally diagnosed with stage 3c ovarian cancer. I went through the pretty standard treatment – surgery, 18 weeks of chemo, and I’ve been clean ever since. I had a bad scare this summer where my CA125 was elevated, but it was something else out of whack in my body that is now under control. But we all live with those random scares all the time, particularly with ovarian cancer because of the high recurrence rate.

What were your initial emotions for each diagnosis? How were they different?

Like anyone with a first diagnosis, I was shocked when I learned I had breast cancer. But for ovarian? I was pissed. I’m still pissed. How could this have been missed? Why wouldn’t any breast cancer patient consider taking the ovaries out too, or at a minimum start regular CA125 testing? I just feel like this was missed by my doctors. I hadn’t had any kind of scan for 4 years. That just doesn’t make any sense.

Did you get ovarian cancer because you had had breast cancer? Are you BRCA positive and if not, is the risk increased anyway?

I was tested for the genetic mutations and I am BRCA negative, so in theory, there’s no real link. At first they considered the ovarian cancer as a possible metastasis from breast until the pathology came back.

But I’m not at all convinced there isn’t some other link – can it really be that my risk for ovarian cancer was just the same as everyone else?

How would you compare the experiences from a treatment and support perspective?

The treatment for breast cancer really kicked my butt. I was down for the count for a few days. Ovarian cancer was a harder mental game. The statistics are terrible, and you spend so much time in treatment, nearly every day once you add in trips for Neupogen or Neulasta (boosts white blood cells). I tolerated the treatments better but had a lot more pain in other areas –back, legs, etc. I just felt bad all the time.

Personally I felt supported through both, but from the broader society, breast cancer definitely gets all the press, and the results are so much better. Ovarian cancer is such a game changer.

Do you feel that you were more knowledgeable about breast cancer than ovarian, in general, before both diagnoses? If so, what would you like to see to increase awareness and education for ovarian cancer?

I’m frustrated that the breast cancer and ovarian worlds are so separated. It’s like the breast cancer world doesn’t want to have anything to do with the ovarian cancer world because of the statistics. There really needs to be a concerted effort for those doctors and those support groups to come together more. And, I think there needs to be awareness for all breast cancer patients in particular. Is there a higher risk? Why wouldn’t people who had had any kind of cancer be treated as higher risk? Why didn’t this doctor know about the increased weight trigger? Why wouldn’t they have started tracking my CA125 then?

In the end, I’m mad about how much support breast cancer gets compared to how little ovarian cancer gets. AND I’M A BREAST CANCER SURVIVOR.

If a newly diagnosed patient of breast or ovarian cancer came to you for support and advice, what would be the top 3 things you would say to them?

2 – Reach out for support from people that have been there. You will get an honest account of what you’re facing AND real hope from those survivors. You don’t get the full story from the doctors. And reaching out to other people is far better than the internet or books.

3 – Be your own advocate. If you don’t think something’s right, speak up, keep pushing. Don’t assume your doctors know everything.

Thank you Georgette. You are an inspiring survivor and we appreciate you sharing your story with us.

My wrap-up thoughts…
I don’t know if the statistics are increased for BRCA negative people, but it seems very odd that Georgette would be diagnosed with both and it not be related in some way. Maybe there is some gene connection that isn’t yet discovered? They are finding new ones to test all the time. But her point is so valid – why wouldn’t the doctors know the warning signs? Why wouldn’t someone be considered higher risk ANYWAY?

I also find it interesting – the focus on breast cancer awareness might be exactly how Georgette discovered her lump, earlier than any mammogram would have detected it. So awareness campaigns are very effective. And yet another year has passed with far too little emphasis on ovarian cancer. We can change that. We have to change that.

To the survivors – you are my heroes, keep on kickin’ it! To our many supporters – you ease our pain and lift us up. And, to the people not yet touched by this disease personally – don’t let it come your way. It’s time to stand up and fight.

So my call to action is the same as always. Know the symptoms. Spread the word. Get involved. Help fund critical research. And save lives.

Please note that our next post will be a response from Dr. Benigno. Stay tuned…